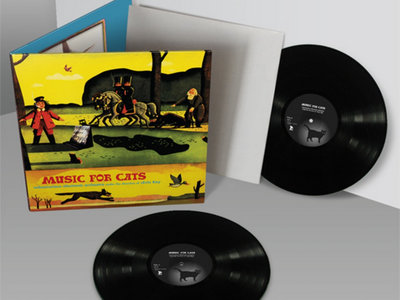 We found a box!

Music For Cats: recorded in the mid-90s, Cevin Key's first solo effort is anything but that; its sub-title, Subconscious Music Orchestra under the direction of Cevin Key, pretty much gives it away: this is a collaborative album like no other, sporting guest appearances from Dwayne Goettel, Genesis P.Orridge, Philth, Mark Spybey and others. And while all of the above are or were at one point involved in Key's more famous Download project, this record, with its dub meets analogue synthesizer experimentations is its own massive beast.

Originally released on Metropolis Records in 1998, the CD is now out of print. This is the first-ever vinyl edition, and it features updated, new photos in an exquisite double-LP gatefold sleeve.

"...effortlessly dark, cryptic, and discomforting, and often quite pretty."
-AllMusic

Side B
4 Bird
5 Blotter
6 Inside Jam World

Side C
7 Herbalist Rule
8 Greenhouse Gasses
9 Have You Ever Felt Like This?